Police Brutality: What If You’re Not James Blake? LawCash® commends Jame Blake for telling the story of the false arrest and manhandling doled out by the NYPD earlier this week as he left a fancy hotel in New York.  By now, a few short days later, it’s become front page news, Mayor de Blasio and Police Commissioner Bratton have apologized (after James Blake went on Good Morning America and said he would like an apology) and the NYPD has stripped the offending officer of his badge and gun. Perhaps most chilling, the police officer responsible had not reported the false arrest or apologized, as protocol mandated, and presumably would not have done so if James Blake had not come forward and not indeed been James Blake, tennis star. Less mentioned in the media is the fact that the man James Blake was mistaken for apparently turned out to also have nothing to do with the identity theft crime for which Blake was arrested.

What happens if you’re African American, or biracial, or anything other than white and not a world famous, good looking, articulate, Ivy-League educated athlete holding an elite player’s badge to the US Open and have been a victim of police brutality, excessive force, or false arrest?  Unfortunately, we at LawCash know intimately how the story-line goes then, especially in cases that don’t become high profile as did the Eric Garner choke-hold death captured on video. What often happens is nothing, other than dealing with fighting a wrongful arrest, a tarnished reputation, and injuries or lack of income from being slammed to the ground, choked, or in other ways the victim of excessive force and over-zealous prosecution.

That is not to say that the NYPD and other police forces around the country do not do valuable work and mean well. They provide a valuable service and do a difficult, at times-dangerous job, which for the most part they perform honorably and well.  But that doesn’t change the fact that too many people in this country do not receive justice and are not treated equally under the law. There is no path to justice for many without lawsuit funding, even if they are in the right and have a good trial attorney. LawCash has provided lawsuit funding over almost two decades to many plaintiffs who were not famous but still the subject of police brutality, excessive force, wrongful imprisonment ,or false arrest. While they might not ever receive a public apology and swift (or any) action by the police department against any officer who may be culpable, LawCash has helped to see that the victims of police brutality and false arrest get their day in court and achieve justice.

In coming forward, James Blake noted that, “there was probably a race factor involved.”  The average person mistakenly body-slammed to the ground and falsely arrested probably doesn’t have the fame, wealth, status, access to the media, and the means to withstand an attack in the media or in court if he or she goes forward with a complaint about police brutality and a perceived racial element in the mistreatment.  Indeed, the practice of racial profiling exists throughout the country in various degrees.  James Blake recognized the valuable work the police do but told his story publicly on network TV because he knew that, “this happens too often, and most of the time not to someone like me .. . a lot of people have no voice to have any recourse.”

LawCash® hopes that with the eloquent voice of James Blake and the seemingly constant reports and videotapes lately showing African American men being slammed to the ground by the police or the victims of excessive force, the incidences of police brutality, excessive force, and wrongful arrest will decrease and eventually abate altogether.  But in the meantime, we are proud to help those injured through no fault of their own, by providing litigation funding for those who have experienced excessive force or police brutality and cannot afford a lawyer or pay for the injuries or damage done to them without lawsuit funding.

As James Blake summed up, “Everybody should be held accountable.” 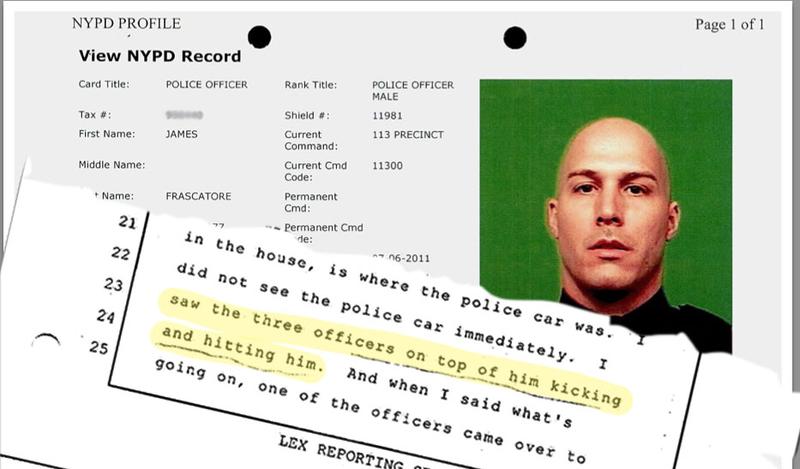